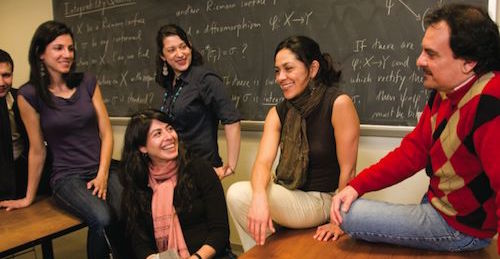 The Center for Latin American, Caribbean, and Latino Studies works to promote the study and understanding of Latin American and Caribbean cultures and the communities established in the United States by peoples from this vast and extraordinarily diverse region with a special focus on the New York City metropolitan area, and more broadly on the United States.
As part of its mission, CLACLS organizes public forums, lectures, symposia, and academic conferences featuring contemporary issues in the region, as well as cultural presentations of art, music, dance, and photography with colleagues from Mexico, Argentina, Cuba, Puerto Rico, Brazil, Peru, Colombia, Ecuador, Guatemala, and the Dominican Republic. The core mission of CLACLS is to actively support and advance the study of Latin America, the Caribbean, and Latinos in the U.S. in the doctoral programs of the Graduate Center, and to provide opportunities for Latino students at the Ph.D. level. The Center has five important goals: recruit Latino students for the Ph.D. programs at the Graduate Center; provide financial assistance to Latino Ph.D. candidates with fully funded five-year fellowships; disseminate information on the dynamically growing Latino populations of the U.S. and especially the New York metropolitan area through the Latino Data Project reports; raise funding to support the scholarly, academic, and public service activities of the Center; and promote the interdisciplinary study of Latin America, the Caribbean, and Latinos in the U.S. at the graduate level of post- graduate study.
CLACLS is based at The Graduate Center of City University of New York (CUNY). It was inaugurated in October 2001 with the support of a broad cross section of Latin American and Latino-studies faculty specialists representing academic disciplines in the arts, social sciences, and humanities from every CUNY college. Former CUNY Vice-Chancellor Jay Hershenson, GC Professor Bill Kelly, New York City philanthropist Albert Bildner, and then City Councilman and later State Assemblyman, Guillermo Linares, were critical supporters who helped establish CLACLS.