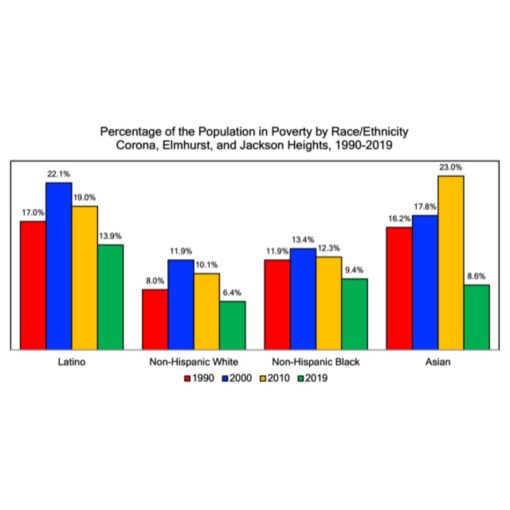 NEW YORK, December 5, 2022—A new report published today by the Center for Latin American, Caribbean and Latino Studies (CLACLS) at The Graduate Center of The City University of New York (CUNY) shows that median household income among Latinos in Corona, Elmhurst, and Jackson Heights increased by 11.8% between 1990 and 2019, while the city’s median income increased by 27.7%.

The report, titled “The Socioeconomic Background of the COVID-19 Pandemic in New York City: Latinos in Corona, Elmhurst, and Jackson Heights, 1990-2019,” compares the socioeconomic conditions among Latinos in these neighborhoods in terms of sex, age, income, poverty, and education.

While the overall poverty rates in the city decreased since 1990, the percentage of Latinos living in poverty in these neighborhoods was the highest of all race and ethnic groups at 13.9%.

These figures are right before the pandemic hit and present an unequal picture, especially as Corona, Elmhurst, and Jackson Heights had some of the highest rates of COVID-19 prevalence than the rest of the city (1 in 19 people, 1 in 16, and 1 in 19 respectively). A New Report from the Center for Latin American, Caribbean and Latino Studies at The Graduate Center, CUNY Tracks the Partnership Status Rates […]